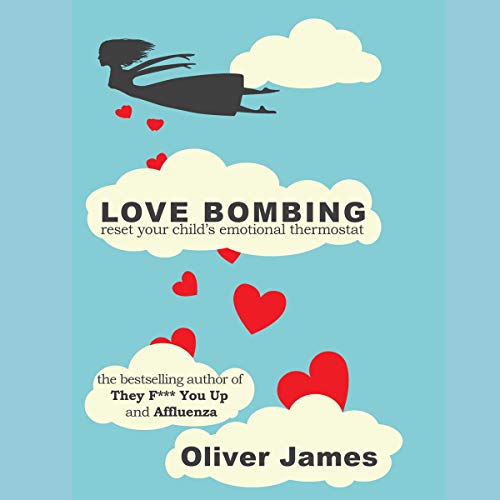 This blog post is from Oliver James, psychologist, Guardian columnist and author. His books include ‘Affluenza’, Love Bombing and ‘How Not to F*** Them Up’.

Here Oliver describes the subject matter of his latest book ‘Love Bombing: Reset Your Child’s Emotional Thermostat’ – Sarah Ockwell Smith tried Oliver’s Love Bombing technique with her own son, and heartily recommended this book to any parents struggling with their child’s behaviour.

Nine year old Tim hated himself. He told his mum Marianne he was ‘rubbish’ at everything and over time became more threatening towards his talented older sister. Marianne was at her wits’ end, having tried everything suggested by her son’s GP and teacher, including a stricter punishment regime. My advice was to try the opposite – a technique called Love Bombing.

What is love bombing?

It entails giving your child a very intense, condensed experience of feeling completely loved and in control. Love bombing works best with children, from the age of three, to the onset of puberty. Love bombing can work for depressive children, such as Tim, as well as classic cases of attention deficit hyperactivity disorder, or when a child is aggressively defiant. It also works well for shyness or academic underachievement. But there does not have to be a ‘problem’; itwould improve the well-being of parent and child in almost every case.

Interestingly, a significant number of the parents who found it useful had used strict routines with their babies or toddlers. They reported feeling that love bombing seemed to reset their child’s emotional thermostats and enabled them to parent in more loving and effective ways.

The child is told that they will have a period when they can do whatever they like, within reason. During this time, they receive their parent’s exclusive attention. The child is in charge of where they go and what they do, including meals and bedtimes, until the end of the period. Their parents tell them that they love them, and give them lots of cuddles, as often as possible. The period can be as long as 48 hours, a single day or shorter bursts. Ideally, to ensure lasting effects, the experience is rekindled daily for half an hour.

So, does it work?

Perhaps surprisingly, children are more willing to accept boundaries afterwards. When a child is playing up, they rarely need stricter discipline. They are feeling needy and deprived, loveless and powerless. If you give them an intense period in which they feel loved and in control, the neediness and anger dissolve. Almost all the parents who have done it report a more biddable, calmer child. Parents sucked into a nagging, niggling pattern become more authoritative.

Marianne took Tim away for 48 hours to a hotel. He chose it and they spent time watching TV and messing about. A week later she said, ‘It definitely worked. So far there’s been no major unhappiness.’ Eighteen months later the self-loathing has gone. Tim recalled, ‘the best bit was just being alone with my mum.’

It might sound like just spending ‘quality time’. This is something entirely different. Going that extra mile into the love bombing zone can save you a huge amount of grief – and it can be a whole lot of fun. As part of a professional couple Marianne could afford a hotel. However, it doesn’t have to be expensive. There are as many ways to achieve love bombing as there are families!

Do you want to find out more about how calmer relationships, and parenting techniques can help meet your child’s needs and support better behaviour? Then visit our knowledge hub for more articles,

Have you tried love bombing? Did you find it helped your relationship?